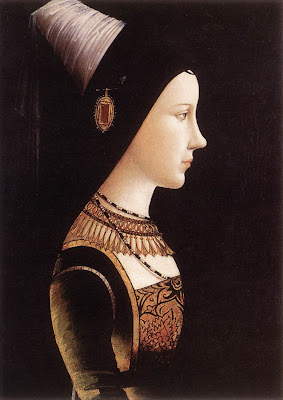 Posthumous portrait painted by Michael Pacher in cirka 1490.
A wealthy heiress, Mary of Burgundy was one of the most eligible bachelorettes of her time, so wealthy that she was even called “Mary the Rich”, and desired by the French king as a wife to his son, the dauphin. However, a life as queen did not appeal to the young duchess, especially not when the future king was thirteen years her senior! So she defied the king himself, and allied herself with the Netherlands who forced her to sign what is known as “The Great Privilege”.

Mary was born on the 13th of February 1457 to Charles the Bold and his wife Isabella of Bourbon, in Brussels. She proved to be the only child her father ever would beget, in spite of him having three wives throughout his life. This made Mary the heiress to the vast Burgundian domains in France and the Low Countries, and a sought-after bride. When she was only five years old, her father received a marriage proposal from Ferdinand II of Aragon, and Nicholas I, Duke of Lorraine was also a suitor as he wished for the two domains to become one. Later also the French King Louis XI’s brother Charles made an offer, which infuriated the French king who actually attempted to prevent the necessary Papal dispensation for consanguinity. However, when Louis XI himself finally had a son, Charles who would later be Charles VIII of France, he wanted him to be the one to marry Mary, who was thirteen years older than the dauphin.
In 1577, Mary’s father died, making her Duchess of Burgundy in her own right (her mother had died in 1465). She was nineteen then, and would turn twenty within a month. At the death of her father, the French king tried to force her into a marriage with the dauphin, but her stepmother, Margaret of York (sister of Edward VII of England) advised her to turn to the Netherlands for help against Louis XI. The Netherlands were willing to help, but only if she signed what was to be known as “The Great Privilege”, which returned significant control and rights to localities in the Netherlands. This agreement required the approval of the States to raise taxes, declare war or make peace. Such was the hatred of the people for the old regime that two of her father's influential councilors, the Chancellor Hugonet and the Sire d'Humbercourt, having been discovered in correspondence with the French king, were executed at Ghent despite the tears and entreaties of the young duchess.
Probably feeling somewhat lost and alone, Mary decided to find a husband among her suitors, and her choice fell on the Archduke Maximilian of Austria who would later become Holy Roman Emperor, though this after Mary’s death. They were married on the 18th of August 1577 at Ghent. As a result, her lands became part of the Habsburg empire. In the Netherlands, affairs now went more smoothly, the French aggression was temporarily checked, and internal peace was in a large measure restored.
The marriage proved fruitful – Mary gave birth to their first child Philip (who would be known as Philip the Handsome and marry Juana of Castile, the daughter of Isabella and Ferdinand and older sister to Katherine of Aragon) eleven months after their marriage. A daughter, Margaret, followed in 1480, and another son Franz who unfortunately died as an infant.
Only five years into their marriage, Mary died after an accident when she was out falconing with her husband and her horse tripped and fell, landing on the Archduchess, and breaking her back. She died on the 27th of March 1482, having made a detailed will. She was only twenty-five years old. Mary of Burgundy is buried in The Church of Our Lady in Bruges.
http://womenshistory.about.com/od/medrenqueens/p/mary_burgundy.htm
http://en.wikipedia.org/wiki/Mary_of_Burgundy
Lagt inn av Malena of Royal Women kl. 17:00