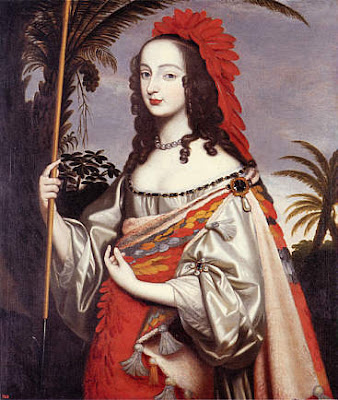 (Sophia dressed as an Indian, painted by her sister Elizabeth)
As the eldest, surviving child of Elizabeth of Bohemia (daughter of James I) to be a protestant, Sophia of Hanover was the nearest heir to the British throne, and thus was made heiress presumptive for the purpose of cutting off any claim by the Catholic James Francis Edward Stuart (half-brother to sisters and queens, Mary and Anne). Sophia was actually the youngest of all her siblings, but they had all died when the succession to the throne of Britain was in jeopardy, Sophia herself being 71 years old at the time when an act settled by the parliament in 1701 said that in the default of legitimate issue from Anne or William III, the crowns were to settle upon "the most excellent Princess Sophia, electress and duchess-dowager of Hanover" and "the heirs of her body, being Protestant". The fact that Mary and William died without issue, and not one of Queen Anne’s eighteen babies lived through infancy, led England into the lack of a Protestant heir. It was out of the question to have a Catholic monarch on the throne ever again.
Sophia was born in The Wassenaer Hof, at The Hague in the Dutch Republic the 14 October 1630. Her parents, Elizabeth of Bohemia and Frederick V, the Elector Palatine, had fled from Bohemia after the sequestration of their Electorate during the Thirty Years' War (which is too long and complicated to sum up here). Sophia was the youngest child, and as her older siblings, she was taught classic and modern languages, art and literature.

She was first courted by her cousin, King Charles II, but this came to nothing, and in 1658, at the age of 28, she married Ernest August at Heidelberg, and it proved to be a love match. In 1692 Ernest August became the first Elector of Brunswick-Lüneburg, making Sophia Electress of Hanover. When her husband died in 1698, she was devastated and grieved her husband deeply.
Sophia was a devoted mother, and she and her husband had seven children who survived infancy, among them George who would later become George I of Great Britain, becoming the heir presumptive to the throne when his mother died.
In 1676 Sophia befriended Gottfried Leibniz, a German mathematician and philosopher. Letters between them proves Sophia to have been a woman of exceptional intellectual ability and curiosity. She was also well-read in the works of René Descartes and Baruch Spinoza.
Sophia died at the advanced age of 83, the 8th of June, 1714 of a stroke, just seven weeks before Queen Anne died. If she had lived for just a little longer, she would have been the next monarch of Britain, but it passed to her son George instead.
(Btw, thanks to Signe for the beautiful header! I do not have photoshop or any other softwares, so my recent header was made in paint and looked rather... amateurish!)
Lagt inn av Malena of Royal Women kl. 15:32